Forever Young: 11 Musicians Who Never Seem To Age A Day

Plastic surgery, oddball diets, praying to pagan deities, each of these are ways in which us regular folks try (and fail) to repel the wrinkles that come with simple existence. To us plebeians, the goal of ageless beauty is but a pipe dream, but to the elite of the music scene, it is a reality.

Of course, not all musicians are able to attain a form of immortality, otherwise we'd still be listening to Beethoven or the like. Only certain modern musicians have been able to crack the code and stop the ravaging effects of time, at least for the time being. Study these eleven specimens who never seem to age a single day and maybe you'll be able to attain lasting youth yourself.

Go look at a picture of Pharell from 1990. Now go check one out ten years later circa 2000, then one from this year. Notice anything? No, you don't, and that's the scary part. There are no wrinkles, or laugh lines, or almost any visible forms of aging. Why? Perhaps because Pharell is some form of immortal, able to transmute the emotion of happiness into a rejuvenating substance. That's really the only reason an artist would make a song like "Happy," right?

Here's a really easy one. Gwen Stefani hasn't aged a day in nearly thirty years because she's a vampire. Duh. I mean, look at her. Milk-pale skin, a hypnotic stare and voice, and seemingly always sporting bright red lips, Stefani is obviously juicing up on the blood of innocents to fuel her dark curse. Maybe vampirism is a bit of a stretch, but if you can find a way to explain how a mother of three who's been consistently working since 1986 is able to look so damn good, then by all means explain away.

Retaining that bright, shining, and youthful smile well into her 30's, the one and only Beyoncé Knowles will probably always be an ageless beauty. Not because she practices a dark form witchcraft or regularly performs blood sacrifices, no sir. In fact, Beyoncé's apparent immortality is not her doing at all; Beyoncé doesn't age through the sheer force of will of the Beehive (what her legions of fans call themselves) who couldn't handle a world where there was a single flaw in the perfection that is Bey. It's kind of like if Santa Clause existed only because so many young children believed in him, just for realsies, and with Beyoncé.

Quite honestly, lets hope Leto continues his ongoing practice of stopping the aging process through sheer force of swag, because he's really too pretty to grow old anyway. The Thirty Seconds To Mars front-man is one of the few musicians to successfully branch out into the movie industry, receiving an Oscar nomination in 2013 for Dallas Buyers Club and set to play the Joker in 2016's Suicide Squad, and isn't a stranger to the world of business either, having launched his own digital marketing company and streaming service. There's certainly more to come from Leto, so lets hope he holds the years at bay for as long as he can.

Despite getting a little chubbier under the neck, the infamous (and infamously ridiculous at times) Kanye West has barely aged a day since his arrival on the music scene in the 1990s. The only explanation, of course, is that Kanye is a mutant, much like Wolverine, only that West doesn't have a healing factor that inhibits the aging process. Instead, West's mutant gift is the ability to unconsciously transform a mixture of self-assurance and cockiness into an anti-time aura that slows down the effects of aging. We should be glad, because no one can get enough of Kanye at music awards shows.

Everyone knows that the Colombian-born singer Shakira, or Shakira Isabel Mebarak Ripoll to be exact, has hips that do not lie, ever. What the classic Shakira track fails to mention, however, is that the unique vibrations created when the singer shakes said hips are also able to disrupt the flow of time, essentially turning back the clock so Shakira always looks like she's around 28 or something. That, or she truly is a She-Wolf, and standard human aging does not apply to her lycanthropic form.

Unlike many others on this list, Beck has not achieved his strangely youthful visage through preternatural means. No, Beck has simply reached a state of chilaxed zen-ness, otherwise reserved for the most devoted of  Tibetan monks, that has allowed his body to function without deteriorating in the slightest. Unfortunately, the means of achieving such mental and physical states are only released to members of the Church of Scientology, of which Beck has been affiliated with since childhood.

Much like the ever-beautiful Gwen Stefani, John Anthony Gillis, better known as Jack White, hasn't aged a day in years simply for the fact that he's vampire, plain and simple. Possessing a slightly different strain of vampirism than Mrs. Stefani, White's version of the curse does not afford him supernatural beauty and grace, but a magnetic aura of weirdness that draws fans to his music. White's music is also quite good, vampire curse notwithstanding.

Jamie Starr, Christopher Alexander Nevermind, The Purple One, Joey Coco, and a few others, Prince has gone by many names throughout the years. But why Prince, originally? Because he's the Prince of all Vampires, obviously. The only sire of Dracula, now deceased, Prince is the reigning king of all beings vampiric, though he prefers the princely moniker over the kingly one. Prince has the aesthetic charm and alluring creepiness of both Stefani and White, which only makes sense as he's the spiritual-vampire-father to both of his "children." You probably already had this one figured out, because what human man looks that good at 56 AND wears blouses? None, save vampires.

Okay, so the secret to Fergie's long-lasting youthful vigour is pretty easy to answer, because as good has her plastic surgeon is, you can still tell she's had work done. Despite the fact that she's gone under the knife, for a woman the age of 40, and an ex-crystal meth addict, Fergie looks pretty damn good for her age. 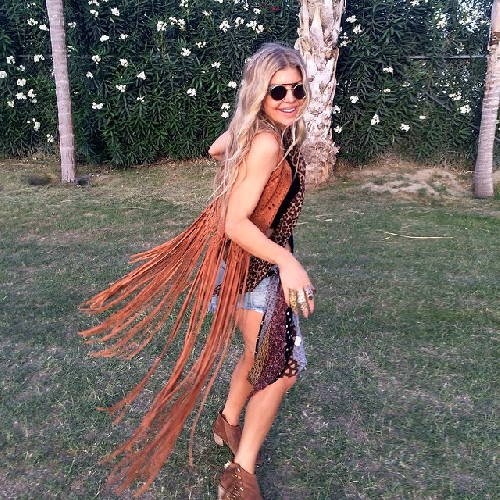 In Madonna's mind (a mental realm all should fear to enter) she hasn't aged a day since 1979. To everyone else, Madonna's age is much more apparent. Looking damn fine for a 56 year old mother of four, Madonna has definitely aged gracefully, at least physically. When you factor in the whole "acting your age" part of growing up, Madonna definitely seems a lot older than she is. Maybe if she stopped wearing legless outfits and grinding up on twenty-somethings named Drake in front of crowds of people, Madonna would actually earn a place among her ageless musical peers. Instead, Madonna's old age is just blasted in front of your face simply because she's still acting like she's in her twenties. We're still giving Madonna an honourable mention for trying so hard anyway.

The saddest songs all of time
Top 65 Happy Songs That Will Make You Smile Playlist
The 35 Funniest Songs Of All Time
Top 10 Songs To Listen To When You're Angry
I'm So Sorry, The 25 Best Apology Songs Playlist